The Japanese animated film Tsurune will debut in 2022 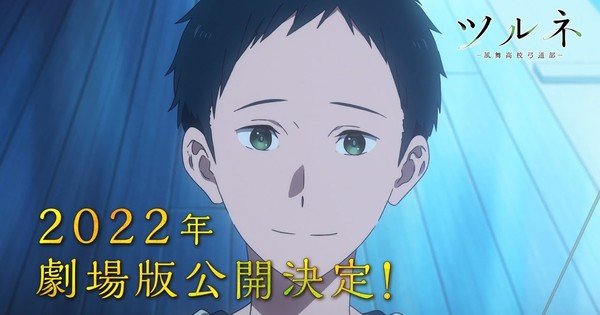 Tsurune (in the original Japanese Hepburn: Tsurune: Kazemai Kōkō Kyūdō-bu, literally “Kazemai High School's Kyūdō Club”) is a Japanese light novel series written by Kotoko Ayano, with illustrations by Chinatsu Morimoto. The first novel won a Special Judge Award in the Kyoto Animation Award competition in 2016 and was published by the studio in December of the same year.

An adaptation for an anime series for television, produced by Kyoto Animation, aired from October 2018 to January 2019. The animated anime film will premiere in 2022.

Minato Narumiya was in his middle school kyūdō club until a certain incident in his last tournament made him decide to give up archery for good. When he attends high school, his childhood friends Seiya Takehaya and Ryōhei Yamanouchi try to get him to join the high school kyūdō club again, but he refuses. However, an encounter with a mysterious man at an archery range in a forest inspires Minato to resume archery. Minato joins the Kazemai High School Kyūdō Club and together with his old friends and new teammates, Nanao Kisaragi and Kaito Onogi, they aim to win the prefecture tournament.

Minato is a first year student. Seiya and Ryohei's childhood friends. A teammate of Shu and Seiya in middle school. He is on the Kyudo men's team. He and Shu had the same archery teacher before going to the same middle school. His mother died in an accident that injured him and he now does a lot of household chores in his home, such as cooking meals. He lives across the street from Seiya. He begins the series with target panic, which in his case manifests itself as a tendency to lose his arrow too quickly and miss the target.

Seiya is a first year student. Childhood friend of Minato and Ryohei. A teammate of Shu and Minato in middle school. He is also the head of the club and the captain of the men's team. Seiya is intelligent, the first of his class in Kazemai, and although he does not like to talk about himself, he obviously cares a lot about his relationship with Minato even to the point of leaving the most prestigious Kirisaki school system to follow him to Kazemai, wanting to convince him to restart Kyudo.

Ryohei is a first year student. Childhood friend of Minato and Seiya. He went to another middle school like his friends, but found himself in high school. He is part of the Kyudo men's team. He is a relatively novice, having started Kyudo at the end of middle school after seeing Minato in a game.

Nanao is a first year student. He is also Kaito's cousin. He is part of the Kyudo men's team. He is cheerful and seemingly superficial and has many fans.

Kaito is a first year student. He is also Nanao's cousin. He is part of the Kyudo men's team. He takes Kyudo very seriously and is very critical of those who he believes do not. Many freshmen in the club's freshman year cited their fear of him as the reason they left the club.

Rika is a first year student. He is the captain of the women's team. The other girls admire her a lot.

Noa is a first year student. She is part of the Kyudo women's team.

Yuna is a first year student. She is part of the Kyudo women's team.

Tomio, also called Tommy-sensei or Oni Archer, is the teacher who serves as an advisor to the Kyūdō Club. He has a 6 dan rank in archery, but his back often comes out immediately after shooting.

Masaki is a senior priest of Yuta Shrine, later becomes the coach of the Kyudo Club. He has a 5-dan rank in Kyudo. At one point, like Minato, he had "target panic" and temporarily lost the ability to shoot properly.
Kirisaki High School Archery Club

Shu is a first year student, also Minato and Seiya's former teammate in middle school. He and Minato had the same archery teacher before attending the same middle school. Stoic and solitary, he appreciates his rivalry with Minato but considers unworthy reasons other than his own.

Daigo is a third year student. He is also the vice-captain of the Kyudo Club.

Senichi is a first year student. He is the identical twin of Manji, who is in the same club. Seemingly interchangeable with his brother, they ferociously mock competitors and despise those they don't consider talented. Both use an unusually quick release style but remain highly accurate archers.

Manji is a first year student. He is the identical twin of Senichi, who is in the same club. Seemingly interchangeable with his brother, they fiercely mock competitors and despise those they don't consider talented. Both use an unusually quick release style but remain highly accurate archers.

Hiroki is a third year student, he is also the Captain of the Kyudo Club.

An adaptation of the anime television series was originally slated for October 15, but due to organizational issues, the series ran from October 22, 2018 to January 21, 2019 on NHK. The series was produced by Kyoto Animation and was directed by Takuya Yamamura, with Michiko Yokote handling the scripts for the series and Miku Kadowaki designing the characters. Harumi Fuki composed the music for the series. The opening theme is Luck Life's “Naru”, and the closing theme is ChouCho's “Orange-iro” (オ レ ン ジ 色). The series is broadcast simultaneously by Crunchyroll. Sentai Filmworks acquired the series for distribution in North America, Australasia, South America and other territories. An un-aired 14th episode was screened during an event on March 3, 2019 and released with the first Blu-ray / DVD on May 1, 2019, with Crunchyroll later released in English.

On October 22, 2020, it was revealed that the series would receive a new anime film project. It was later announced that the film will premiere in 2022.