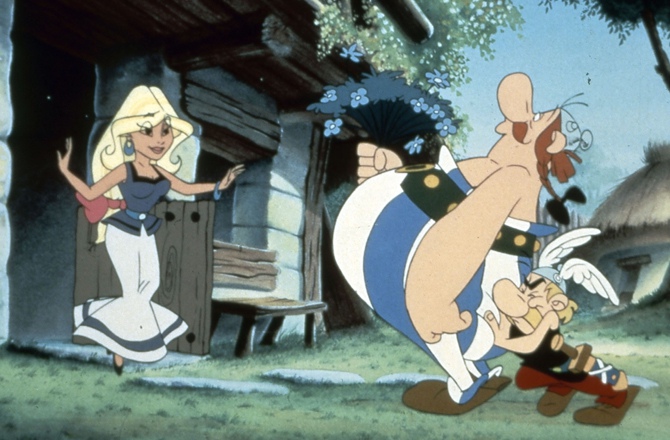 Asterix against Caesar (Asterix and the surprise of Caesar) Also known as Asterix and Caesar's surprise is a Franco-Belgian animated film on the adventure and comedy genre written by René Goscinny, Albert Uderzo and Pierre Tchernia, and directed by Paul and Gaëtan Brizzi, and is the fourth adaptation of the comic series by Asterix . The story is an adaptation that combines the story of Asterix the Legionnaire and Asterix the Gladiator, sees Asterix and his friend Obelix leave to rescue two lovers from their village, who had been kidnapped by the Romans. The theme song for the film, Astérix est là, was composed and performed by Plastic Bertrand.

To honor Julius Caesar's campaigns of conquest, gifts from all over the Roman Empire are brought to Rome. Seeking to cement the celebrations, Caesar orders Caius Fatous, head of a major school of gladiators, to prepare a grand show, threatening to make it the main attraction in case of failure. In the small village of Gaul that opposes the Romans, Asterix notices that his friend Obelix is ​​behaving strangely. The druid Getafix soon reveals that he is in love with Panacea, the granddaughter of chief Vitalstatistix, who had recently returned. Trying to win her affection, Obelix is ​​taken by despair when the young woman meets Tragicomix, a much younger and handsome man who intends to marry her. Trying to spend time together, the two lovers venture into the nearby woods, only to be kidnapped in an ambush by a group of Romans, led by a new recruit who hopes to make an impression with his centurion at a nearby garrison. .

When Asterix and Obelix find out what happened, they inform the village, which proceeds to attack the garrison. Later, the centurion is questioned. He reveals that he angrily ordered the recruit to take away his prisoners, knowing the consequences his actions would bring. Asterix and Obelix, joined by Dogmatix, proceed to the nearest Legion headquarters for information on where the recruit went. Upon learning that he was sent to a distant outpost in the Sahara with his prisoners, they enlist in the army to follow them. Arriving at the desert frontier, the two learn that Panacea and Tragicomix have fled the Romans and took refuge in the desert. Upon learning of this, Asterix and Obelix proceed in the direction they have taken. Eventually, they come across a gang of slave traders, who reveal that they sold the two as slaves and sent them to Rome.

Securing the passage to the Roman capital, Asterix and Obelix learn that Panacea and Tragicomix have been bought by Caius. The pair attempt to meet him at a bathhouse, forcing Caius to see how they easily beat his bodyguards. Impressed, he orders his men to capture them for his show. Following a small argument with his friend that causes him to lose his magic potion, Asterix is ​​kidnapped by Caius's men. When Obelix finds out that he is missing, he proceeds to search for him, rescuing him from a flooded cell. However Dogmatix disappears, after escaping into the city sewers to retrieve the magic potion. Without both, the couple continues to search for Panacea and Tragicomix and quickly learns that, under Caesar's orders, Gaius has arranged for them to become the grand finale of the Emperor's show at the Colosseum.

Trying to get in, the couple goes to Gaius's school and the following day secures a job as a gladiator. The Gauls soon spoil the show, winning a chariot race and easily taking down a number of gladiators. As the lions are unleashed to attack them, along with Tragicomix and Panacea, Dogmatix arrives with the magic potion. The group defeats the lions with the potion, while Obelix, distracted by Panacea, accidentally shatters a third of the Colosseum. Impressed by the spectacle, Cesare grants the Gauls their freedom. Returning home, the group arrives at their village's typical victory celebration held in their honor. As the villagers celebrate, Asterix sits alone in a tree, having fallen in love with Panacea upon his return.